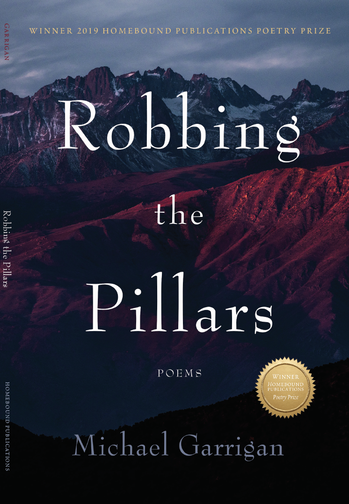 The headwaters of Robbing the Pillars begin deep in the anthracite country of Pennsylvania and wind their way through mountain tributaries before reaching the Susquehanna River. These poems venture out west through smeared Nebraskan skies, up wild Washington waters, and into the Siskiyou Mountains as meteors split the sky on fire. They traverse the wet woods of Maine along the West Branch of the Penobscot River to the peak of Katahdin. They hike the Appalachian, Continental Divide, and Pacific Crest Trails.

In the early coal mines of Pennsylvania, miners crawled into the deepest parts of the mines, set dynamite, and blew joists holding up walls in hopes of getting the last valuable rock before the mountain collapsed -- robbing the pillars. The poems in Robbing the Pillars are the dynamite, the pillars, the rock, the mountain, and the miners. They embrace terrains familiar and forgotten -- those which have been stripped and left to become wild again. They explore the physical (geological, riverine), familial, personal, and cultural landscapes of our world as we rob its pillars.

"Wandering where fish and memory and his feet will take him, Michael Garrigan proclaims that the land “isn’t ours to write, but to read.” Here’s a poet who reads the land well, with deep attention and devotion, who, if you take care to enter his poems, will show you remote creeks and the undercut banks where trout wait, who will help you hear elk crossing a river at dusk and chant the names of rocks, who will sing lamentations for what we’ve done to the rivers that run through this precious earth and still have faith enough to praise what persists." —Todd Davis, author of Native Species and Winterkill

"Garrigan’s fine collection professes, articulates, and, most importantly, enacts a profound affection for the natural world and our non-human neighbors. The contact here is direct, and the engagement with the terrestrial earth, that invaluable text, is authentic. These are poems capable of enhancing, deepening, our days astream and afield — a rare feat, indeed." —Chris Dombrowski, author of Body of Water

"In poems both visceral and spiritual, local and cosmic, Robbing the Pillars immerses us in the darkness and the light of our modern world. At its heart is a stubbornly-alive Pennsylvania wilderness, where the water is orange, the resources are brutally extracted, and yet “brown trout / build redds in Dunkin Donuts coffee cups.” It’s the 21st century and the natural world is in total collapse—for a poet to elegize would be enough, but Michael Garrigan goes further, taking us to a place where wind “shreds linen into lichen,” re-wilding our spirits. Robbing the Pillars dares to celebrate, to pay reverence, and never stops seeking the next “deep hole at the bend / that looks to hold trout." —Anders Carlson-Wee, author of The Low Passions